Welcoming the panel members and the participants,  Prof. O R S Rao, Vice-Chancellor  of the university said , “According to the Supreme Court , as of June 2020 , about 3.27 crore cases were pending before Indian courts, of which about 85,000 have been pending for over 30 years.  Justice delayed is justice denied. Deployment of Technology could help in transformation of justice delivery , by speeding up disposal of cases and  making justice accessible to a common man at less cost “. “ It is commendable that in the wake of COVID pandemic , Indian High Courts and the Supreme Court quickly resorted to  e-filings  and e-hearings , thereby ensuring continuity of justice delivery in urgent cases. However, in order to implement the e-Courts system across the country, there are a number of challenges.”, added Prof Rao.

Addressing the participants, Mr. Biresh Kumar enlightened on  the initiatives of the e-Courts initiative of  the Supreme Court , which was started in 2005 and completed phase-I and phase-II and is currently in phase-III. He explained that latest technologies like Block Chain and  Artificial Intelligence are being deployed on a pilot basis and a number of mobile apps are being used for various legal applications.

Appreciating the ICFAI University for choosing a relevant topic like this, Mr. Prashant Kumar Singh explained how Judiciary in Jharkhand has successfully adopted technology ,  the challenges faced by the elderly advocates and how the younger advocates helped them. However he expressed the need for implementation of the system at the district and taluk levels, where the litigants as well as advocates are not conversant with  technology.  Mr. Chandan Kumar Singh highlighted the major challenges faced like internet infrastructure, cyber security concerns and lack of standardisation of video conferencing platforms across India . Mr. Pradeep Kumar Bhattacharyya presented his views about the jurisprudential aspect of justice and said that e-justice can only be supplement but not a substitute for the intellect of the judges. A number of interesting queries raised by the participants were addressed by the panel members. 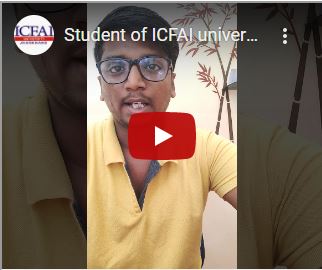 Nikhil Paswan, BBA student (2018-21) shares his experience with regard to Online Internship that he is doing at L&T, a Premier Corporate company. More details on the ICFAI University Jharkhand